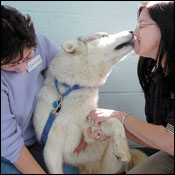 There were no tell-tale signs in her body language that she was tired and weary.

Under her white coat with a tan design, the English coon hound mix hid the stress that told the difficult journey of a rescue dog.Holding her blue leash, Bryna Davidow placed both hands on Mary’s head and massaged it. With dogged determination Mary looked straight ahead as if a massage were an everyday treat. No wagging tail gave her away, but her brown eyes told another tale as they grew heavy.

In the visiting room at Baypath Humane Society of Hopkinton, Lisa Muldoon-Wytiaz held Mary’s snout as Davidow massaged her shoulders and the muscles down her legs and out to, and in between, her toes.

When Davidow momentarily stopped her light-touch massage, the 1-year-old dog turned to face her as if to ask: “Why did you stop?” Davidow finished with a touch of shiatsu: a thumb massage on Mary’s pointed tail.

As part of a 20-hour internship at the Small Animal Massage Certification Program at Bancroft School of Massage Therapy in Worcester, Davidow gives some shelter dogs at Baypath in Hopkinton a massage. Mary was one of the lucky ones to receive such special treatment.

“It’s a big part of getting the dogs ready for adoption,” said Davidow, a resident of Framingham. “It helps them find a forever family.”

Muldoon-Wytiaz of Shrewsbury, also a student at Bancroft, who previously completed her out-of-class internship, assisted with Mary’s massage.

Mary, rescued from Indiana the day before they planned to put her down, arrived at Baypath last week.

“People in New England are real responsible about their dogs and cats being neutered or spayed, but it’s different in other states,” said Blair Boyd, Baypath’s shelter manager. “In Indiana, where coon hounds are a dime a dozen, they keep the best of the best for hunting and the rest are put down or, if they are lucky enough, are sent here.” Mary, quiet and shy, always pulls on her leash, which shows she wasn’t socialized much. “She was probably stuck in a barn with other hound dogs,” said Boyd. “The massage helps her to learn to trust and relax.”

Just like people, dogs can enjoy the benefits of a professional massage, said Davidow, who with more than a dozen years of experience working with dogs, owns a pet service company in Framingham called Must Love Dogs, which also provides dog massage.

“Dog massage is perfect for shelter dogs,” said Davidow. “It can help ease the mental and physical stress that a dog often experiences after being surrendered to a shelter.”

Not every one of the 12 dogs, four puppies and 20 cats, currently at Baypath received a massage, but Vincent, a pure-bred 3-year-old husky was next in line. As Davidow and Muldoon-Wytiaz massaged his jaw, where shelter dogs typically hold a lot of stress, Vincent sat relaxed, nestled against Davidow.

Because of Vincent’s heavy silver coat, the two therapists’ touch went deeper. In appreciation, Vincent licked Muldoon-Wytiaz’s face, but wanted no part of anyone touching his tail.

Bancroft began its program of massage for small animals in 2003.

“The animals associate touch with a good feeling and makes them more placeable into homes because they are less stressed and anxious,” said Theresa Gagnon, director of the animal program at Bancroft School of Massage Therapy.

“And massage is not just for not dogs. It’s for cats, rabbits and ferrets, too.”

Mary and Vince are both available for adoption. Vince, surrendered to Baypath because his owner could no longer care for him, likes to be the center of attention. His sweet temperament makes him good company for children and adults, but he does not like to share his attention with any other animals. Because of his breed, he needs a six-foot fenced-in-yard.

Mary wants to be with a family, who would love her and pay attention to her all the time. “She’s shy because of her lack of socialization, but once she warms up to people, she’s a really sweet dog,” said Boyd. (Kathy Uek can be reached at 508-626-4419 or kuek@cnc.com.)