By Jessica Turetz/ Special To The Bulletin And Tab
Friday, February 17, 2006 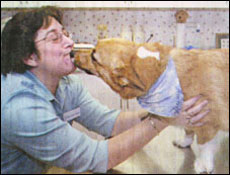 When the massage was over, Jeremy gave Bryna a big kiss.

Jeremy “JJ” Mantos sits patiently on the table as relaxing music flows behind him. He is about to have his first massage. Pretty routine stuff, except Jeremy is a dog.

“Older dogs tend to be brought in more frequently…but it’s good for puppies too,” says the cheerful Davidow, a 12-year veteran dog trainer.

“Dogs are skeptical. … The first massage is 10-20 minutes. I don’t get into any deep tissue work, I want it to be a pleasurable experience,” says Davidow.

Her Framingham-based business, “Must Love Dogs,” has served the MetroWest areaand beyond for three years and she recently added “doggie massage” to her broad range of training and obedience services. “I was looking for a part time job that I would enjoy… I was looking for dog related activities.”

Davidow currently offers the service on a complimentary basis at the Natick Animal Clinic each Saturday, in addition to private appointments. Costs run at approximately 30 dollars for each half hour.

She stresses that while this is both a relaxing and fun gift for the dog in your life, there are also serious health benefits. Dr. Randy Caviness of Tufts School of Veterinary medicine and his own private practice concurs. “From my point of view, massage can be an extremely vital mode of therapy, its difficult to go wrong.”

He highlights the positive result on a dog’s lymphatic system as well as muscular and skeletal increased range of motion. He says massage can relieve pain from back spasms and helps joints work better. Caviness likeness the health benefits to those of humans getting massaged. For example, as with athletic humans, very active canines get sore muscles and massage can really help.

Not everyone is catching on as quickly Besides the sheer newness of dog massage, there is another element that is raising eyebrows among veterinarians; there are currently no national certification requirements for dog massage.

Davidow is soon to receive her certification from the Bancroft School of Massage in Worcester. The school opened in the 1950s as a place of study for human massage and began offering its small animal massage program in 2003.

Director of animal programs Teresa Gagnon acknowledges that in terms of certification regulations, “things are all over the map,” but she claims the Bancroft program is the strictest in the country. “We have taken our human program and condensed it and applied it to animals.”

The program lasts seven months to a year. Classes of no more than 20 students are fully trained in anatomy and physiology and are under the supervision of both veterinarians and massage therapists. There is a major emphasis on hands-on learning, unlike other available programs done through videotape training.
Susan Weinstein, executive director of the Massachusetts Veterinary Medical Association, echoes Gagnon in terms of veterinary involvement. . “If they say, ’Don’t bother checking with your pet’s doctor,’ that would be a concern,” she says.

In addition to the lack of standard licensing practices, Weinstein attributes veterinary skepticism to the holistic aspect of dog massage. “Most vets have their faith in medicine…that’s why they are so cautious. Their professional reputations and lives are on the line.”

She guesses many vets don’t recommend any alternative therapies, but thinks they do have relevancy.

“Chiropractics and acupuncture have found their place … the profession is very much in transition on that,” she said.

Weinstein thinks eventually vets will probably offer dog massage on premises in a mobile capacity, meaning a visiting masseuse once a week or so.

Besides the medical skeptics, dog massage also has some unique limitations. “Typically a dog will put up with 20-30 minutes worth. Any more and they get itchy, the attention span isn’t the same as humans, says Davidow.

“A dog’s responsiveness depends less on the breed and more on the personality,” she says.

“Some dogs just don’t like to be touched,” said Caviness.

Caviness acknowledges the practice of dog massage is still in its early stages and a lot of vets still consider it an alternative therapy. However, he believes dog massage will one day join more mainstream veterinary practices.

“It’s too beneficial,” he said. “People go home and see the dogs moving better and feeling better with less pain.”

Back at the Natick Animal Clinic, feedback for Davidow’s newly introduced service has been quite positive.

And after his owner has snapped the last digital photo capturing this day of luxury, Jeremy coolly trots out of the room, perhaps with an extra spring in his step.